A small country, 10452 km sq. on the Mediterranean Sea, Lebanon is a multicultural and multilingual land of merchants directly descending from the ancient Phoenicians.  Due to its history and territorial position, it is characterized by a free market economy based on an unrestricted exchange of goods, services and capital, and serves as a privileged platform for access to the markets of the Middle East region and the Gulf.

As part of the strategy to integrate Lebanon further into the international community and the global economy, trade agreements were signed with many Arab and European Countries.

Since 2003 the Euro-Mediterranean Partnership provided the conditions for a progressive and reciprocal liberalization of trade in goods with a view to establishing a bilateral free trade area. Later on, in 2004, the Free Trade Agreement with the European Free Trade Association gave free access to Lebanese products into EFTA countries. Moreover, since 2005 Lebanon is a member of the Greater Arab Free Trade Area (GAFTA), receiving full exemption of tariffs on all agricultural and industrial goods traded between the 17 Arab member countries. Last but not least, the Council of Ministers recently signed the Extracted Industries Transparency Initiative (EITI), even before starting the exploration of its offshore. The EITI is a global standard by which information on the oil, gas and mining industries is published, to promote the open and accountable management of oil gas and mineral resources.

Lebanon is well known as a financial hub for banking activities. It has one of the most sophisticated banking sectors in the region: solid and growing, it is considered the true spine of the economy. Thanks to the strict control exercised by the Central Bank, among several factors, the system has showed good resilience to internal and external shocks and made its way through the overall context of the international financial crisis.

Tax regulation is also very favorable for those who want to restructure their global business and invest in the country. Nationals and foreigners can take advantage of the Double Taxation Agreements that Lebanon has signed with 32 countries, including Italy, France, Malta, Cyprus, Egypt, UAE, and Iran.

Business structures established under Lebanese law are governed by the Lebanese Code of Commerce (LCC) and the rules of the Code of Obligations and Contracts on Partnership Agreements, provided they do not contradict the LLC rules.

A joint venture may take a number of forms. This gives parties significant flexibility in designing a suitable structure for their projects. The joint venture can be a simple contractual arrangement or create a separate legal structure, either a stock corporation (société de capitaux) or a partnership (société de personnes) established to carry out the project.

Several factors must be considered when deciding which structure a business should adopt.

Hereby, the main characteristics of the corporations in Lebanon: 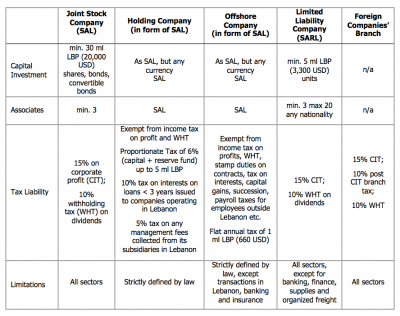 In addition, a call for foreign investments is now in place to improved infrastructure all over the country in various sectors like oil and gas, energy, information technology, telecommunications, water-sewage, and tourism.

While specific sector, such as oil and gas, follow their own procedure and tenders, there are two incentive schemes that investors can choose.  According to Law n. 360/2001, they differ in the extent of exemptions provided and in the eligibility criteria required. 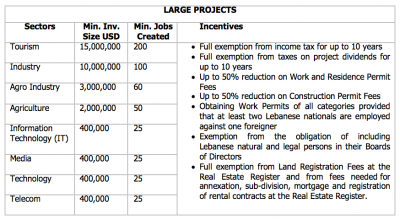 To conclude this overview, it is worth to mention the young, dynamic, and polyglot population, that is another feature of Lebanon’s economic attractiveness, especially in sectors with high-value added, such as ICT, considered of the main drivers of knowledge-based economies.

In the latest Global Competitiveness Report by the World Economic Forum for 2016-2017, Lebanon ranked 18th globally in the overall quality of the educational system (for higher education and training), and 6th globally in the quality of math and science education. That surely makes it one of the best sources of talent not only to serve the region but also the international scene.

In general, salaries in Lebanon are relatively lower than regional averages.

According to the World Bank, 70% of the population generates an annual income of less than USD 10,000. The latter combined with the aforesaid highly skilled labor force would form an attractive combination for any company willing to invest in Lebanon.

Other articles by Team Legalmondo
Italy – The protection of creativity in advertising
Climate Change Litigation – How lawyers and you could help save our planet
China – Dispute Resolution Methods
A US Court Judgment Enforced in China – What Does it Mean for You?
Argentina – The limited liability company
Santo Domingo – How to set up a company
The Lebanese Banking Sector
Influencer and Advertising: a problematic relationship
Iran – Online business and eCommerce
Other articles that may interest you
The Company financial statements in Switzerland
How to set up a LTD company in Italy
Investment opportunities in the Islamic Republic of Iran
Brazil – How to start a business
Investing in Peru
Croatia – Setting up a Limited Liability Company
Setting up a company in Switzerland: Incorporation and Shares
Company Law in Venezuela
Setting up a company in Switzerland: Corporate bodies