Summary – The Covid-19 emergency has accelerated the transition to e-commerce, both in B2C relationships and in many B2B sectors. Many companies have found themselves operating on the Internet for the first time, shifting their business and customer relationships to the digital world.  Unfortunately, it is often the case that attempts at fraud are concealed behind expressions of interest from potential customers. This is particularly the case with new business contacts from China, via email or via the company’s website or social network profiles.  Let’s see what the recurrent scams are, small and large, which happen frequently, especially in the world of wine, food, design, and fashion.

Fortunately, the bad guys in China (and not only: this kind of scams are often perpetrated also by criminals from other countries) are not very creative and the types of scams are well known and recurrent: let’s see the main ones.

The most frequent case is that of a Chinese company that, after having found information about the foreign products through the website of the company, communicates by email the willingness to purchase large quantities of the products.

This is usually followed by an initial exchange of correspondence via email between the parties, at the outcome of which the Chinese company communicates the decision to purchase the products and asks to finalize the agreement very quickly, inviting the foreign company to go to China to conclude the negotiation and not let the deal fade away.

Many believe it and cannot resist the temptation to jump on the first plane: once landed in China the situation seems even more attractive, since the potential buyer proves to be a very surrendering negotiator, willing to accept all the conditions proposed by the foreign party and hasty to conclude the contract.

It is well known that the Chinese are skillful and very patient negotiators, and commercial negotiations are usually long and nerve-wracking: a negotiation that is too easy and fast, especially if it is the first meeting between the parties, is very suspicious.

That you are faced with an attempted scam is then certified by the request for some payments in China, allegedly necessary for the deal.

There are several variants of this first scheme.

The most common are the request to pay a fee for the registration of the contract with a Chinese notary public; a fee for administrative or customs duties; a cash payment for costs of licenses or import permits for the goods, the offer of lunches or dinners to potential business partners (at inflated prices), the stay in a hotel booked by the Chinese side, followed by the surprise of an exorbitant bill.

Back home, unfortunately, very often the signed contract will remain a useless piece of paper, the phantom client will become unavailable and the Chinese company never return the emails or calls of the foreign client. You will then have the certainty that the entire operation was designed with the sole purpose of extorting the unwary foreigner a few thousand euros.

The same scheme (i.e. the commercial order followed by a series of payment requests) can also be carried out online, for reasons similar to those indicated: the clues of the scam are always the contact by a stranger for a very high value order, a very quick negotiation with a request to conclude the deal in a short time and the need to make some payment in advance before concluding the contract. 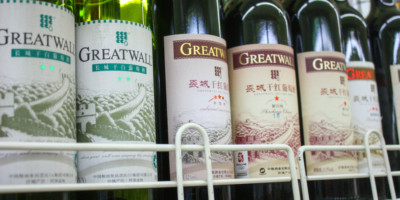 Another very frequent scam is the bank account scam which is different from the one usually used.

Here the parts are usually reversed. The Chinese company is the seller of the products, from which the foreign entrepreneur intends to buy or has already bought a number of products.

One day the seller or the agent of reference informs the buyer that the bank account normally used has been blocked (the most frequent excuses are that the authorized foreign currency limit has been exceeded, or administrative checks are in progress, or simply the bank used has been changed), with an invitation to pay the price on a different current account, in the name of another person or company.

In other cases, the request is motivated by the fact that the products will be supplied through another company, which holds the export license for the products and is authorized to receive payments on behalf of the seller.

After making the payment, the foreign buyer receives the bitter surprise: the seller declares they never received the payment, that the different bank account does not belong to the company and that the request for payment to another account came from a hacker who intercepted the correspondence between the parties.

Only then, by verifying the email address from which the request for use of the new account was sent, the buyer generally sees some small difference in the email account used for the payment request on the different account (e.g. different domain name, different provider or different username).

The seller will then only be willing to ship the goods on condition that the payment is renewed on the correct bank account, which – obviously – one should not do, to avoid being deceived a second time. Verification of the owner of the false bank account generally does not lead to any response from the bank and it will in fact be impossible to identify the perpetrators of the scam. 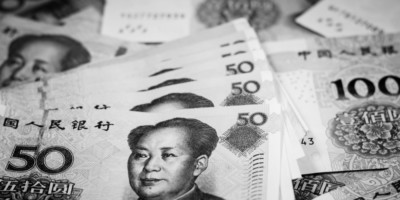 The scam of the fake Chinese Trademark Agent

The sender is a self-proclaimed Chinese agency in the sector, which communicates its willingness to intervene and avert the danger, blocking the registration, provided that it is done in a very short time and the foreigner pay the service in advance.

In this case too we are faced with a clumsy attempt at fraud: better to trash the email immediately.

By the way: If you haven’t registered your trademark in China, you should do so right now. If you are interested in learning more about it, you can read this post. 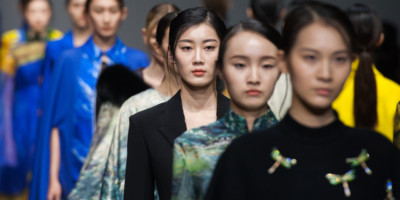 A widespread scam is the one involving designers and companies in the fashion industry: also in this case the contact arrives through the website or the social media account of the company and expresses a great interest in importing and distributing in China products of the Italian designer or brand.

In the cases that I have dealt with in the past, the proposal is accompanied by a substantial trademark license and distribution contract in English, which provides for the exclusive granting of the trademark and the right to sell the products in China in favor of a Chinese online platform, currently under construction, which will make it possible to reach a very large number of customers.

After signing the contract, the pretexts to extort money from the foreign company are similar to those seen previously: invitation to China and request a series of payments on site, or the need to cover a series of costs to be borne by the Chinese side to start business operations in China for the foreign company: trademark registration, customs requirements, obtaining licenses, etc. (needless to say, all fictional: the platform does not exist, nothing will be done and the contact person will vanish soon after she has received the money). 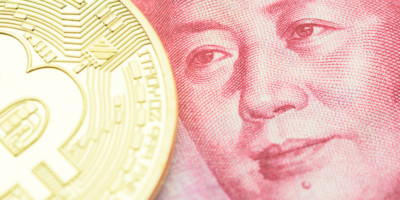 The bitcoin and cryptocurrency scam

Recently a scam of Chinese origin is the proposal to invest in bitcoin, with a very attractive guaranteed minimum return on investmen (usually 20 or 30%).

The alleged trader presents himself in these cases as a representative of an agency based in China, often referring to a purpose-built website and presentations of investment services made in English.

This scheme usually involves also an international bank, which acts as agent or depository of the sums: in reality, the writer is always the criminal organization, from a bogus account which resembles that of the bank or financial intermediary.

Once the sums are paid the broker disappears and it is not possible to trace the funds because the bank account is closed and the company disappears, or because the payments were made through bitcoin.

The clues of the scam are similar to those seen previously: contact from the Internet or via email, very tempting business proposal, hurry to conclude the agreement and to receive a first payment in China.

In the cases mentioned above, and in other similar cases, once the scam has been perpetrated there is almost no point in trying to remedy it: the costs and legal fees are usually higher than the money lost and in most cases it is impossible to trace the person responsible for the scam.

How to verify the data of a Chinese company

The name of the company in Latin characters and the website in English have no official value, they are just fancy translations: the only way to verify the data of a Chinese company, and to know the people who represent it (or say they do) is to check out the original business license through the online portal of the SAIC (State Administration for Industry and Commerce).

Each Chinese company has in fact a business license issued by SAIC, which contains the following information:

It is a Chinese language document, similar to the following: 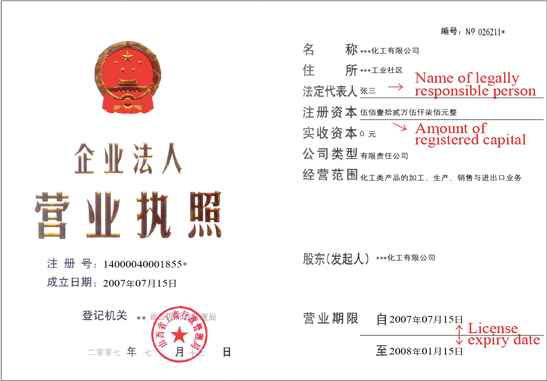 Verifying the information, with the help of a competent lawyer, will make it possible to ascertain whether or not the company exists, the reliability of the company and whether the self-styled representative can actually act on behalf of the company.

Regardless of whether the Chinese company is interested in importing Italian wine, French fashion or design or other foreign products, an easy check to do is to ask a list international companies with which the Chinese party has previously worked, to validate the information received.

In most cases, the Chinese side will oppose giving references for reasons of privacy, which confirms the suspicion that in reality such phantom success stories do not exist and this is an attempt at fraud.

Having positively marked the first points, it is still advisable to proceed with great caution, especially in the case of a new customer or supplier.

In the case of the sale of products to a Chinese buyer, it is advisable to ask for an advance payment and for the balance of the price when the goods are ready, or the opening of a letter of credit.

In case the Chinese party is the supplier, it is recommended to provide for an on-site inspection of the goods, with a third party to certify the quality of the products and the compliance with the contractual specifications.

If a business relationship is already in progress and you are asked to change the method of payment of the price, you should carefully verify the identity and email account of the applicant and for security it is good to ask for confirmation of the instruction also through other channels of communication (writing to another person in the company, by phone or sending a message via wechat).

How we can help you

Legalmondo offers the possibility to work with a specialized lawyer to examine your need or assist you in the drafting of a contract or contract negotiations with China.

Photo by Andy Beales on Unsplash.